REDWOOD CITY, Calif. — It took California police detectives more than 40 years to link John Arthur Getreu to at least two brutal murders that occurred near the Stanford University campus in the 1970s.

It took a San Mateo County jury less than an hour to find him guilty Sept. 14 of killing one of those women, Janet Ann Taylor, 21, of La Honda.

Taylor, a 21-year-old sophomore at nearby Cañada College, was the youngest daughter of football legend Chuck Taylor, a Stanford alumnus and player who later served as head football coach and athletic director at the school.

Getreu, 77, of Hayward, was convicted of first-degree murder in the March 25, 1974, death of Taylor, whose body was found on the side of Sand Hill Road west of Interstate 280. Taylor, whose car was out of commission, had been hitchhiking home from the Stanford campus, where she had gone to visit her best friend.

Her friend, Debbie Adams, testified last month that Taylor decided to hitchhike, like many young men and women did in the 1970s, instead of waiting for a ride because she was anxious to feed her puppy, ABC News reported. Getreu and his alleged crimes were the subject of a “20/20″ episode last month.

A dairy truck driver found Taylor early March 25, strangled and dumped in a shallow ditch near the campus, authorities said. Her live-in boyfriend at the time, Russell Bissonnette, testified last month that he was stunned by her death because Taylor was skilled in martial arts.

“Janet had a brown belt,” Bissonnette said, according to the Palo Alto Weekly. “It really surprised me what happened here because I thought she’d be taking anybody apart if they tried to attack her.”

The college student fought valiantly for her life but lost. She was badly beaten in the face and strangled by hands strong enough that the ribbed pattern of her turtleneck left imprints on her neck, testimony showed.

Her rain jacket and shirt were torn down the right side, and her green corduroy pants were ripped at the crotch.

Those pants would become vital to the murder case. Getreu’s DNA was found in the area that was torn, prosecutors said. 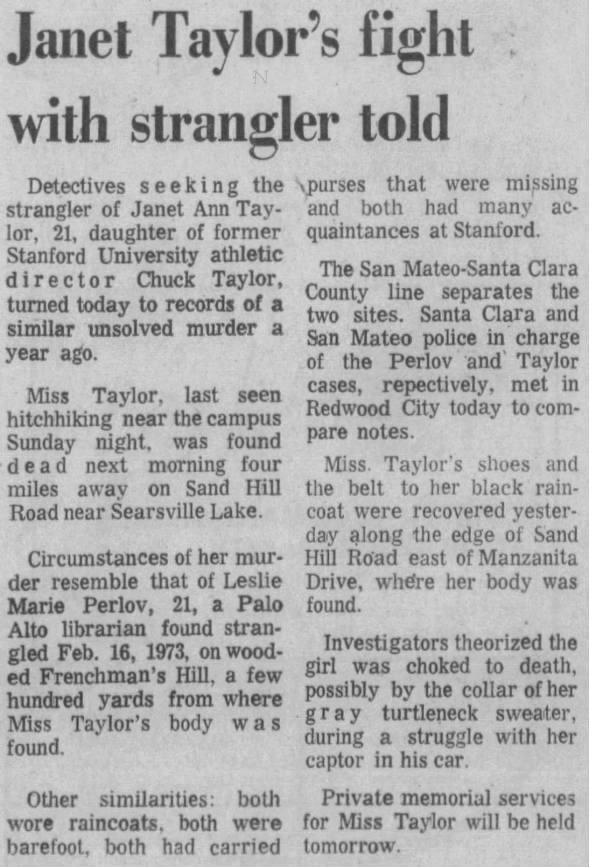 Getreu, who was a medical technician at Stanford Medical Center at the time of Taylor’s murder, is also charged with the murder of Leslie Marie Perlov, 21, a Stanford graduate who was last seen alive on Feb. 13, 1973, as she left work in Palo Alto. ABC News reported that Perlov, who was working as a law clerk, had called her mother from Stanford’s law library to say she was on her way to their Los Altos Hills home.

Like Taylor, Perlov had been beaten and strangled, and there were signs she had been raped. Santa Clara County Coroner Dr. Richard Mason said Perlov’s body also bore signs of prolonged torture, according to ABC News.

Her nose was broken and her eyes were swollen shut from the beating she endured, the news network reported. Her underwear and stockings had been shoved down her throat.

The Perlov and Taylor slayings became part of what was known as the “Stanford murders,” a string of killings on or near the university campus over a span of about 18 months. The Oct. 12, 1974, murder of Arlis Kay Perry, 19, was initially believed to be connected to the other two killings.

Perry, whose husband of six weeks was a pre-med student at Stanford, was found dead inside Stanford Memorial Church, where her husband said she’d gone to pray that night. She’d been strangled and stabbed in the head with an ice pick.

In 2018, authorities linked DNA from the scene to Stephen Blake Crawford, the Stanford security guard who had reported finding Perry’s body the morning after she was murdered. Crawford, 72, fatally shot himself in his San Jose apartment as authorities arrived to take him into custody.

Getreu is awaiting trial in the Perlov case, which is set for 2022. Ill health and a backlog due to the COVID-19 pandemic may mean that trial never takes place.

“This is not the end. We are moving forward,” Perlov’s sister, Diane Perlov, told ABC News.

“I want a trial for my sister’s case. I don’t want any deals,” Perlov said. “There were some really horrible photographs of what Getreu did to Janet, and what he did to Leslie, and I want everyone to see them so they understand what a dangerous person he is.”

Getreu’s son, Aaron Getreu, told ABC News that he and his family knew his father as a kind, gentle family man. He expressed sympathy for the slain women and the loved ones from whom his father took them.

John Getreu’s son urges him to reveal all of his victims: “Let’s let the loved ones get their closure.“ #ABC2020 https://t.co/Ojmxz4NiNk pic.twitter.com/qgxDiT26tT

“My family had no clue about my father’s past and have nothing but sympathy for all of his victims,” Getreu said. “We only knew him as a loving father and grandfather, but science doesn’t lie. With this conviction I hope these families can now have closure.”

He also urged his father to come clean about any additional crimes he may have committed.

“They don’t just stop, you know? That’s the scary part,” Getreu said. “How many are there?”

Getreu was a convicted murderer long before he ever encountered Leslie Perlov or Janet Taylor. The son of an Army sergeant major, the Newark, Ohio, native and his family moved often, and at different points in his childhood, they lived in Hawaii, North Carolina, Japan and Germany.

It was in Bad Kreuznach, Germany, that a then-18-year-old Getreu was accused of raping and murdering Margaret Williams following a on June 9, 1963, dance at a youth club. At the time, Getreu was a junior at Bad Kreuznach American High School, and Williams was a freshman.

When Williams, the daughter of a U.S. military chaplain, failed to return home after the dance, a search was conducted. Her body was found on a baseball field behind the club, the Newark Advocate reported at the time.

Like both Perlov and Taylor, Williams had been beaten and strangled.

Getreu was convicted in 1964 and sentenced to 10 years as a juvenile. He admitted to sexually assaulting Williams but said he did not mean to kill her, according to the Advocate.

“I raped her, but it did not occur to me that I could have killed her. I just wanted to knock her out,” Getreu told the juvenile court. “I am deeply sorry for her parents and if I could do something to bring her back, I would do it.”

The Palo Alto Weekly reported last month that Getreu served less than six years before being released under probation supervision in 1969.

German court documents obtained by San Mateo County investigators indicated that officials there believed Getreu was likely to lead a “righteous life” if allowed to return home to his family, according to the newspaper.

Just four years after Getreu’s return to the U.S., Perlov was slain, followed by Taylor in 1974. Getreu was married at the time of the killings.

John Getreu was arrested in 2018 for two murders committed in the '70s. Tonight on #ABC2020 at 9/8c, Getreu’s ex-wife and stepdaughter recall learning when he was arrested: “I’m going, ‘Oh my god, he did it when he was married to me.’ I had no clue." https://t.co/21EMtYxYzn pic.twitter.com/f3UvweCdtr

In 1975, Getreu was convicted of the statutory rape of a 17-year-old girl who was part of the Explorer Scout troop he led, the Palo Alto Weekly reported. Getreu’s first wife, to whom he was married at that time, testified last month that he served his six-month jail sentence on weekends.

Getreu’s past came back to haunt him in November 2018 when he was linked to Perlov’s homicide through DNA and genetic genealogy. Genetic genealogy had just months before resulted in the capture of Joseph James DeAngelo Jr., the long-sought Golden State Killer.

Investigators then turned to Parabon Nanolabs, a Virginia-based company that specializes in genetic genealogy. Parabon’s genealogists plugged the suspected killer’s DNA into a public genealogy database and came up with a list of potential suspects.

“Upon receiving Parabon’s report, the Sheriff’s Office continued to investigate the murder of Leslie Perlov,” Santa Clara County authorities said. “As a result, John Arthur Getreu was identified as a suspect in our investigation.”

John Getreu was convicted this week of the 1974 murder of Janet Taylor. Getreu's son is urging him to reveal if he has more victims: "Let's let the loved ones get their closure."

Our new #ABC2020 premieres TONIGHT at 9/8c on @ABC, and stream on Hulu. https://t.co/Ojmxz54TES pic.twitter.com/ZzPStWyaSF

Detectives surreptitiously obtained a sample of Getreu’s DNA, which matched that of Perlov’s alleged killer. A new sample obtained after his arrest confirmed the match, according to a news release.

The Palo Alto Weekly reported that Getreu made multiple incriminating statements to investigators following his 2018 arrest in Perlov’s death. His interrogation was part of the evidence introduced at his trial in the Taylor case.

Getreu denied having ever been arrested, despite his murder conviction in Germany and his 1975 conviction in California for statutory rape. In the rape case, he said, he was “just accused, interviewed and that’s it.”

“I didn’t serve any time that I know of,” Getreu told detectives. “It was so piddly.”

His 1975 victim, dubbed “Diane Doe,” testified at Getreu’s trial that he had strangled her during the sexual assault, which took place in her family’s home. He also threatened to kill her if she made any noise, Doe said.

Getreu also indicated he had inside knowledge of the murders of both Perlov and Taylor. When an investigator showed him a photo of where Perlov’s car was found, Getreu said he “never went up in the hills.”

“I’ve always been on this side, not the other side,” Getreu allegedly said.

In closing statements, Deputy District Attorney Josh Stauffer pointed out that Getreu’s comment indicated knowledge of which side of the hills Perlov’s body was found.

When Getreu was shown photos of Perlov, one a portrait and the other a crime scene image of her brutalized body, the convicted killer’s response was chilling.

“She’s cute, anyway,” he said, according to the Palo Alto Weekly.

Later in the interrogation, Getreu allegedly admitted involvement in Perlov’s death, as well as that of a second girl.

Santa Clara County Detective Noe Cortez, who conducted the interview, asked Getreu if he expected to someday be caught.

“You had to have known this was coming,” Cortez said, according to the newspaper.

“Yeah, I knew it,” Getreu said, telling the detective he didn’t understand “why it took so damn long.”

John Arthur Getreu will stand trial in the cold-case murder of Leslie Perlov, whose body was found on the #Stanford campus nearly 47 years ago. https://t.co/9wejotngY8 pic.twitter.com/cnyV9C73ct

On Monday, Getreu remained jailed in San Mateo County awaiting his Nov. 5 sentencing in Taylor’s murder, the Mercury News reported. He is expected to be sentenced to life in prison and sent to Santa Clara County for the Perlov trial.

Taylor’s surviving family members thanked police and prosecutors in a statement obtained by the Mercury News.

“We are pleased with the results of the trial,” the statement read. “We miss Janet but have many great memories of her.”

Check out the latest giveaways!

Everything you love about magic1053.com and more! Tap on any of the buttons below to download our app.

Enable our Skill today to listen live at home on your Alexa Devices!

You may be offline. Please check your connection and try again using the Retry button.